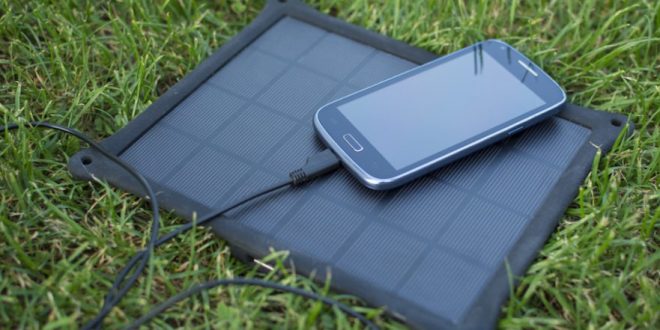 There has been much discussion on the topic of solar energy and how it can revolutionize the way we produce and consume energy.

For this discussion, it’s safe to say that there are two sides to the table. Both are right on certain things, and both are wrong about certain things. But the only constant in this debate if the fact that solar energy is renewable.

There are a lot of solar energy products that help us with everyday needs. From solar panels that deliver free renewable energy straight from the rays of the sun and all the way down to solar chargers that require no plugging into walls or anything.

So, without further ado, let’s get started on the topic of how solar chargers work.

Solar chargers come in lots of shapes and sizes and are designated for various uses. Some, smaller chargers are exclusively made to act as a backup option for your smartphones. These chargers can be connected with your smartphone through a USB or Type C cable to recharge it.

Some larger, ones are exclusively made, for example, street lamps. In some parts of the world, street lamps are solar-powered, meaning they aren’t plugged into the city’s electrical grid but instead power through the sun.

There are also many other types of solar chargers that are designated for bigger and more energy-consuming processes, which we won’t discuss here.

However, it is safe to mention that renewable, free, energy is becoming a hot topic of discussion. It is so popular that some companies develop special batteries that run exclusively solar, and these batteries are starting to find their usage into anything from small gadgets to even cars and various vehicles.

As you all know, the sun has been shinning and keeping us warm, as well as, illuminating even before the world we all know existed. But we haven’t explored all the options of how to harness its energy, apart from using it to grow our crops, illuminate the day, and keep us nice and warm. It was only a few decades ago that we started entertaining the possibility of using the sun’s energy to produce electricity.

The first method of harnessing the sun’s energy was way back in 1954 by researchers at the Bell Laboratories. These brilliant men and women were the first ones to come up with the first solar cell, at that time called photovoltaic cell.

Ever since this brilliant new discovery, we have tried new methods of perfecting the photovoltaic cell, and we’ve made some exciting progress.

The atom is made out of protons and neutrons, with the third particle electron orbiting around them; stuff that we learn in middle school. As you all know, everything, literary everything in the world is made from the atomic particle. A different matter is made out of different forms of neutrons and protons, and some matter holds the electrons more tightly than others. However, if the particular mater intakes more energy than what’s considered static, the electrons can get knocked out of their natural orbit in the atom.

And as it seems, the photon is a simple particle of one energy that can perform this job. Photons, for those that don’t know, is a type of particle that carries the light. Those photons that come from our sun are more than powerful to create an effect called “photoelectric effect”. This effect is essentially the building block of what solar chargers are crated. The photos from the sun have the ability and power to knock electrons out of their usual orbit.

Solar chargers find their usage across many fields and for various processes. If you’re on the market for a solar charger that can do anything from power your smartphone to power various gadgets and devices, then make sure to visit gearspear.com.

Now, let’s move on to how these batteries are able to harness the power of the photoelectric effect.

Every single one of these solar cells is made with silicon and by adding boron and phosphorus. When the photoelectric effect occurs, an imbalance strikes between positively and negatively charged particles in that very same silicon, all with the help of added boron and phosphorus.

But that’s not all, as this is only the process for a single cell, which can create a maximum of two watts of electricity. Instead, more cells are combined to produce more electrical power; and the number of cells combines enough to power an entire battery solely on photons from the sun.

Now, let’s briefly touch on some of the benefits.

The main thing is that these charters don’t require an external energy source to recharge, instead it can harness the power from the sun; the light-carrying protons from the sun.

Since these chargers are effectively powered and recharged by the sun, they carry no emissions with them what so ever. These cells are also quite green since they don’t generate any waste.

As a matter of fact, environmental friendliness is the biggest reason why you should invest in solar energy. A major drawback that anti-solar advocates are in fact right about is that the sun is nowhere to be seen at least half of the day. Also, anything that prevents the sun from shining is also causing our solar generators and batters to be ineffective. Thus not produce electricity.