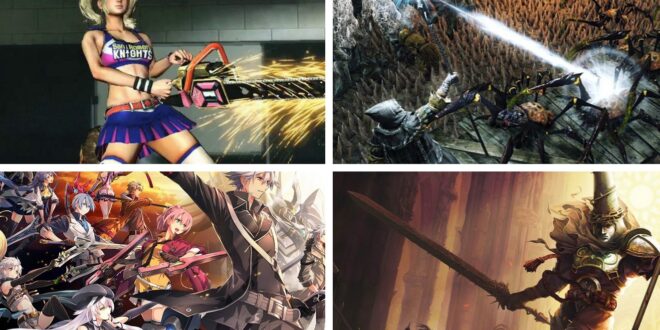 4 Underrated Video Games You Should Try At Least Once

Lana Evanom January 28, 2021 Gaming Comments Off on 4 Underrated Video Games You Should Try At Least Once

Playing video games is a fun and satisfying hobby for many. Many gamers enjoy games of a certain genre, while others like to explore different genres, play styles, and lores. Some play casually and enjoy the most popular games in the gaming community.

Sure, playing bestsellers and those awarded Game of the Year may seem like the best way to enjoy virtual worlds, but there are underrated game titles and even almost-forgotten ones, that gamers should try out before they get fully buried in the dust. Ready to explore a lesser-known game? For more details, check BoostRoyal PT.

The Metroidvania genre stemmed from two iconic video games: Metroid and Castlevania. The genre’s expansive world, side-scrolling mechanics, and challenging quests and levels make it one of the most explored gaming genres. With genre-defining games such as these two, you may want to try out lesser-known game titles such as Blasphemous.

Developed in 2019 by The Game Kitchen, Blasphemous is set in the fictional world of Cvstodia. Players take control of the Penitent One, a silent knight holding the sword Mea Culpa while on a pilgrimage journey. The game is heavily influenced by Christian artwork, architecture, and literature, hence its name. Other than the hero’s search for absolution, Blasphemous’ name may also allude to the developer’s use of religious iconography and Spanish culture in a game. Nonetheless, the game received generally favorable reviews and was awarded Indie Game of the Year and Best Art at the 2019 Titanium Awards.

Blasphemous may seem like your typical Metroidvania game. However, the game has SoulsBorne elements, where the player loses points and loot when they die. The bosses are also challenging, a feature known in the SoulsBorne universe. Eurogamer regards Blasphemous as a well-made hybrid of the Metroidvania and Souls genres. If you are a fan of the Castlevania and Souls series, or just want to delve into a game deeply rooted in Gothic art, then Blasphemous might be the right game for you.

Many gamers’ libraries won’t be complete without a Japanese RPG title. Well-renowned titles with this genre include Final Fantasy, Kingdom Hearts, Chrono Trigger, the Persona series, and Xenoblade. JRPGs are a favorite gaming genre due to their interesting lore, expansive maps, and frequent allusions to Japanese pop culture. If you love JRPGs and want to explore a fictional world similar to the school settings of anime shows, then the Trails of Cold Steel series might be your cup of tea.

The Trails of Cold Steel series has four games, all set in the fictional Erebonian Empire. The game’s map has a futuristic Medieval-like metropolis, somehow like a mixture of steampunk and real-life contemporary elements. The city is similar to bustling cities such as Makati, home of a business district and known for skyscrapers and condominium towers seen on Lamudi, in the sense that it is flecked with traditional architectural designs.

Besides its modern-like fantasy environment, Trails of Cold Steel tackles political warfare and rebellion elements that are a breath of fresh air from the usual magical plotlines of most JRPGs. The game also utilizes a turn-based fighting strategy, allowing players to maximize their characters’ stats and strengths. If the art style and school environment won’t remind you of some of your favorite anime shows, then the Mecha aspect might allure you. While assuming the role of a Mecha pilot takes place in the latter part of the game, leveling up while fighting through the war and standing up for peace and justice are at the core of the Trails of Cold Steel series.

Initially, the Souls series was considered a niche video game due to its challenging playthrough, punishing enemies, stamina-draining boss fights, and mind-tickling lore. However, those qualities made Dark Souls, Dark Souls III, Bloodborne, and Demon’s Souls Remastered gain a more significant foothold in the gaming community–so much so that the series defined a genre called Souls and inspired various developers to create games with the same difficulty, environment, and play style. While the SoulsBorne games remain popular, the series’ second installment, Dark Souls II, is debatably liked by its community. Dark Souls II has the smallest fanbase compared to its other siblings.

Dark Souls II takes place in the dark enchanted world of Drangleic. Like the first Dark Souls, players take the role of the Bearer of the Curse, an undead tasked by the Emerald Herald (the game’s equivalent of the Fire Keeper) with gaining the four Great Souls from powerful god-like beings. Once all souls are obtained, the Emerald Herald asks you to “Seek the King.” From that point, the player will meet Queen Nashandra, who will ask you to slay the king. However, killing the king doesn’t end the game as the queen is the final boss.

Dark Souls II’s detour from the story of its predecessor gave the series a bit of fresh air. The game’s new environment, set of enemies, unique bosses, and Power Stance feature (players can equip another weapon in their left hand, making combat more aggressive and damaging) are factors that recognized Dark Souls II as  “a smart, massive, and incredibly rewarding sequel” by IGN. The Power Stance feature also makes the game replayable.

While Dark Souls II has its strengths, it also has its weaknesses that many Souls fans and other players don’t appreciate. For example, the Hollowing feature of the game punishes the players by shortening their Health Points. Some of the bosses have repeated designs and move sets, making the game relatively more manageable than the other Souls games. Some players claim that the controls can also be clunky, which can be challenging if you are fighting a mob of enemies.

Despite the criticism, Dark Souls II remains a favorite of a handful of Souls players. Suppose you plan to delve into the Dark Souls series, don’t skip Dark Souls II. The game offers unique gameplay mechanics you won’t find in the other Dark Souls games.

When it comes to hack-and-slash games, God of War, Ninja Gaiden, and Bayonetta are popular. But if you are looking for something with zombies, black comedy, and a bit of women empowerment, you might want to add Lollipop Chainsaw into your library.

Lollipop Chainsaw is about a cheerleader named Juliet, secretly a zombie slayer. With her trusted chainsaw, players can navigate Juliet to slay zombies and rescue her classmates. Killing zombies and saving other people in the game help players earn medals that they can use to unlock new skill sets, increase Juliet’s stats, and buy costumes and other necessary items. Players can also collect lollipops along the way, to recover Juliet’s health. The game’s ending varies on the actions of the player; if Juliet is able to save all of her classmates, Juliet will celebrate her 18th birthday as planned in the beginning of the game. If you let more than one classmate die, Juliet’s mother will turn into a zombie.

You may think that Lollipop Chainsaw is not that impressive. Yet the game mixes elements of hack-and-slash and slaying zombies. In other words, the game may give you the satisfaction of keeping zombies from eating and infecting you, while staying cute in your cheerleader outfit.

It may seem more fun to play more well-known games and add them to your library. However, there are times when you might find true joy and entertainment in underrated games such as these four. If you are looking for new games to try out, consider adding these titles to your gaming bucket list.

Previous What Gives macOS an Edge Over Other Operating Systems
Next Why Should You Still Use Ethernet Cables?